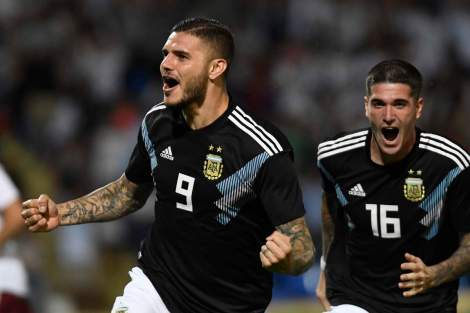 Mauro Icardi and Paulo Dybala finally ended their frustrating waits for first international goals as Argentina secured a 2-0 win over Mexico in Mendoza on Tuesday evening.

Following on from the victory by the same scoreline last Friday, both sides made plenty of changes for the second friendly but it made little difference as Argentina proved too strong for an inexperienced Mexican side.

Icardi, on his eighth appearance for La Albiceleste, started in attack and didn’t have to wait long to break his duck in front of goal. Barely a minute had gone when Erik Lamela slipped in the Inter captain before a touch inside Edson Álvarez saw Icardi finish left footed past Jesús Corona.

The relief was clear for a controversial figure desperate to prove his worth to Argentina after missing out on a place at the World Cup. However, the early goal did little to kick start Argentina and despite carrying the far greater threat, Lionel Scaloni’s side had little to show for it.

A raft of substitutions that began at halfway slowed any progress and it was in fact Mexico that came closest to snatching the next goal. Gerónimo Rulli hadn’t been required to make a single save but debutant goalkeeper Paulo Gazzaniga produced a superb reflex stop from close range to deny Jesús Gallardo an equaliser.

The Tottenham Hotspur keeper, the 16th debutant in Scaloni’s short cycle, was forced into another good save down low to palm out Víctor Guzmán’s long range effort and just as it looked as though Mexico could salvage something, Argentina wrapped up victory.

Giovanni Simeone raced away down the left and squared for fellow substitute Paulo Dybala to roll in Argentina’s second. The goal may have meant very little in the context of things but for Dybala, so often deemed the player to fill Lionel Messi’s sizeable boots, it was a first international goal in 18 appearances.

An emotional Lionel Scaloni was pleased with his side’s second victory over Mexico in five days. The interim coach’s record of fours wins, one draw and one defeat, with only one goal conceded is a decent one and now it remains to be seen if the AFA have seen enough for Scaloni to continue to the Copa América.

The players seem on board, Icardi and Dybala are up and running, perhaps Lionel Messi will be convinced to return and there is a youthful new core to the side but will it be enough?