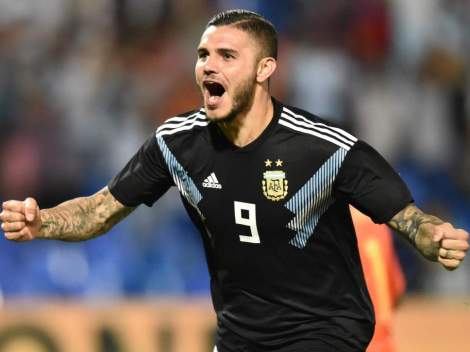 So prolific at club level, Mauro Icardi was in danger of becoming the latest Argentine accused of failing to replicate that form when wearing the Albiceleste and so his first international goal in the victory over Mexico on Tuesday was reason for joy and relief. However, the Inter captain wasn’t only pleased for his personal achievement but praised an atmosphere in the Argentina squad that he has never experienced before.

An eighth appearance for Argentina since making his debut all the way back in 2013, Icardi finally netted his first goal and aside from speaking about that landmark moment, the 25-year-old touched on the work that interim coach Lionel Scaloni has done and the spirit that has quickly been instilled.

“The goal was something I was lacking. Thankfully it came so I am happy. I was waiting for that, but I expected it” Icardi confessed after the game.

“It’s not easy to go without scoring. There is a lot of talk when a striker doesn’t score and now I hope to continue like this.”

However, the back-to-back victories over Mexico to round off a difficult year for Argentina and the atmosphere within this new-look squad provided further reasons to be cheerful.

“I am very happy, beyond just my goal, I am happy for these six games, for the players. We’re a really great group, we can grow a lot and we’re happy with the work of Leo [Scaloni], Walter [Samuel] and Pablo [Aimar].

An emotional Lionel Scaloni spoke of his pleasure after the game and is obviously keen to continue his work with the national team but the decision now lies with the AFA. President Claudio Tapia had said that Scaloni would take charge until the end of the year as the committee would take time in finding a permanent replacement for the disastrous Jorge Sampaoli but Icardi, like many of the players, appears more than open to the idea of the 40-year-old sticking around.

“Of course it’ll be the AFA which decides their future but I can say that right now, there’s an atmosphere in the national team like never before.

“In this new cycle, we all feel comfortable and something very important is being built. I’ve worked under the previous management, but I’ve never seen the companionship and friendship that exists between us now,” Icardi said somewhat damningly of the previous squads.

“When I would come here previously, I didn’t feel what there is today. There are so many youngsters and before with the experienced players it didn’t feel like this. Now, there are a lot starting from scratch and it’s great that the players and coaching staff have got to know each other over these six matches. Everyone wants the best.”

Before talk of Messi’s friends’ club rears its head once again, Icardi was not only quick to state that he hopes the Barcelona icon returns but thought the pressure of the consecutive final defeats weighed heavily on the group.

“Representing our country is the most beautiful thing there is and now all the young players looking to build something for the national team. Previously the experienced players needed to give everything and to win and and it is a pity that it couldn’t happen in a final.

“Now we start from zero and with that drastic change the pressure has gone down.”

Scaloni, or whoever the AFA plump for in 2019, must ensure this atmosphere remains but that doesn’t mean all of the older generation should be discarded.

“Messi? He’s the best player in the world, we wait for Leo,” Icardi stressed.

“We all hope he comes back, everyone wants a player like him especially with the Copa América coming up.”