To start, I ask you to forgive me as I indulge in a personal story. Trust me, there is a point to all this.

I traveled to Los Angeles in September 2018 to cover Argentina for their first post-World Cup match against Guatemela. Argentina won the match 3-0 – each of the three scored by someone for whom it was their first international goal.

After the match we were escorted to the media area where a makeshift tent was set up to house the press conferences for both teams. The area was packed with close to 100 journalists, many of whom I recognized from watching ESPN, TyC Sports, and Fox Deportes. Knowing that this may be a once in a lifetime opportunity, I decided that I would be brave and ask Scaloni a question.

I don’t mean to brag, but for a non-native Spanish speaker, I speak the language fluently and pride myself on my Argentine accent. When I grabbed the microphone and started speaking, those years of study and practice went out the window. I was shaking, filled with uneasiness and the words came out of my mouth in stutters. I was finally able to complete my question which was something along the lines of, “With Renzo Saravia being the last player included, how do you think he played today?”

Scaloni looked back at me. In this moment I knew he was going to rip me to pieces. With a wry smile he responded, “Did you watch him out there?” Now calmer and not shaking so much, I answered back, “He was amazing, the first time he touched the ball he pulled off a couple of moves on his defender. He played with a ton of confidence.”

Scaloni then went on to praise Saravia for his excellent debut that night.

After he answered my question, he said goodbye and got up to leave. His path out of the tent forced him to walk right past me. As he got close, he reached out his hand to mine, shook it, and said, “Thank you, have a good night.”

So, what was the point of this story? I promise you it was not my attempt to simply brag and name drop. As I got back to the hotel that night and couldn’t sleep, my stomach began to churn as I started to imagine what would have happened if instead of asking that question to Lionel Scaloni I had asked it to Jorge Sampaoli. What would he have said to me? Would he have noticed that I was an intruder, a non-Argentine pretending to know about their football? Would he have asked his bodyguards to remove me from the tent and take away my credentials?

While likely all hyperbolic thoughts, I believe you get the picture. According to almost all accounts, Sampaoli was not a pleasant person to be around or to be more blunt, he was not a good person. I have no insights into Scaloni other than those few seconds I spent with him in September and the things I have read about him. But you can learn a lot about a person by how he treats those who appear to be insignificant, people like me. Everything points to him being the complete opposite of Sampaoli. The players like him and the environment he has created instead of fearing him.

With the absolute disaster that was Jorge Sampaoli, doesn’t it sound nice to continue in the direction of a Manager who is a 180 degree change? While true that Scaloni worked under Sampaoli, to this point he has exuded few to none of the same characteristics of his disgraced previous boss.

With the calendar fast approaching 2019, Scaloni’s time as interim manager of Argentina is coming to an end. More and more signs are pointing to him continuing into the new year, but as the full-time boss. This is the right decision by the AFA, not simply because he was nice to me or because he appears to be the anti-Sampaoli, I present you with five additional reasons Scaloni deserves to lead the new generation of the national team moving forward.

Scaloni has got good results and the team has played well

With Scaloni as interim manager, Argentina has played six matches, four wins, one draw, and one loss on an 88th minute goal for Brazil, which is the only goal conceded under his tenure. When was the last time Argentina had this much success over a six-match period? We would have to go back to the days of Tata Martino or earlier. Not only has Scaloni obtained positive results in these matches, the team has played well. Of course, you might be saying, this is Argentina, one of the best footballing countries in the world, they should be playing well. While that is true, over the past several years the Argentina national team has approached their matches as if they were chores they had to complete instead of seeing them as an opportunity and a privilege to represent their country. And the lackluster results proved evidence of just that. Which leads directly into my next point…

Think for one second, when was the last time you enjoyed watching Argentina play? Was it the victory over Nigeria in the World Cup? Or when Messi played Savior against Ecuador? While those were exhilarating moments, the anxiety of those matches weighed down on fans so much that the end result was much more of relief than joy. It seems like it has been years since we could turn on an Argentina match and sit back and enjoy it. That was until these past six friendlies. These faces we see on TV are new and exciting. Many of them have or still do represent the domestic clubs we love. Much of the credit needs to be given to Lionel Scaloni for making this team fun and likeable once again.

Scaloni has continued to communicate with Messi

Each time Lionel Scaloni gives a press conference, without fail, one journalist will ask him about the current status of Messi. Scaloni’s response is always the same, he communicates with him regularly, but Messi is still not ready to return. While we are all excited about this new generation of Argentine youngsters, none of us is ready to say goodbye to the man who has done so much for his county. No matter where you sit on the debate over Lionel Messi, it is hard to argue that his inclusion in the national team would not make the squad better. Scaloni has gone as far as leaving the #10 shirt vacant, not allowing anyone else to wear it in Messi’s absence. Scaloni making an effort to cultivate and grow the relationship with Messi has a lot to do with the likely return of La Pulga next year. 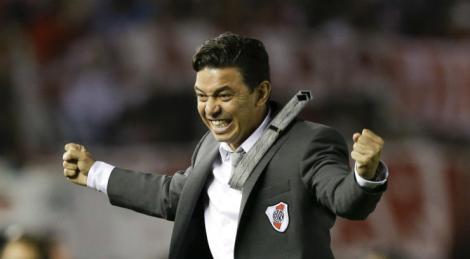 There is No One Else

If not Scaloni, who else could take over the national team? Marcello Gallardo? Perhaps, but the more likely path for El Muñeco would be to go to Europe and gain additional managerial experience there. Guillermo Barros Schelotto? Even Boca fans would argue against that appointment. Javier Mascherano? Maybe someday. Over the past six months, all other candidates have disappeared. While it is true that Scaloni’s only experience being the head man in charge has been these six matches, he has proven more than capable of taking the job.

But if he fails…

Should Lionel Scaloni prove to be the wrong choice, then were does that leave Argentina? To be brutally honest, exactly where we are right now. Hiring Scaloni is a low risk, high reward proposition. If he fails, Argentina will unceremoniously crash out of the Copa America and will be scrambling to find a replacement before World Cup qualification begins. The 2022 World Cup is expected to expand from 32 to 48 nations – which should give CONMEBOL one or two more spots. With the talent Argentina has, even if Messi chooses not to return, I cannot imagine a reality where they are not one of the top six or seven teams in South America, after all, there are only 10 nations. Scaloni may end up not being the right man for the job, it’s impossible to predict what will happen. But if Scaloni can continue down the path he has begun to pave, we could be headed back towards the days when Argentina was a perennial threat to win any tournament they competed in.

While it may not be the most compelling argument, Lionel Scaloni deserves the full-time job, because, why not? What do we have to lose?

Jimmy lived in Córdoba, Argentina as a teenager and is still an active Socio for his beloved club, Belgrano. He currently lives in Seattle, WA and loves to write about football when he has a break from work and family. He also runs the Belgrano – English twitter account.