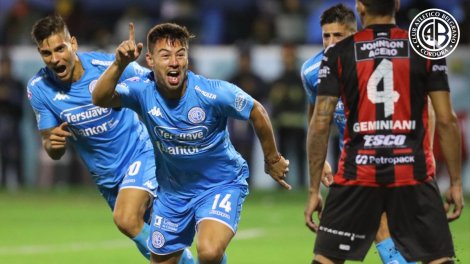 It may still prove too late but Belgrano ended their goal drought at the ideal moment to secure a vital win over relegation rivals Patronato on Friday evening and in doing so have breathed life into their survival bid.

Six consecutive draws, five without scoring, had seen Belgrano fail to really improve their situation in the drop zone and while the supporters in Córdoba could have excused for fearing the worst it took quarter of an hour for Federico Lértora to head the home side in front.

Shortly after the break Mauricio Cuero’s teasing cross led to Marcelo Meli tapping in a second and when Patronato failed to cut the deficit and then saw Nicolás Pantaleone sent off it was left to Maximiliano Lugo to bend in a wonderful third for Belgrano from a free-kick.

Earlier, San Martín de San Juan came within minutes of claiming a surprise away win over Lanús but José Sand’s stoppage time equaliser resulted in the visitors settling for a point. A point that leaves San Martín, Belgrano and Patronato all tied in the final two relegation spots.

A dull first half ended with Gonzalo Castillejos bundling San Martín in front after Rolando García Guerreño clumsily failed to clear a cross into the Lanús six-yard box.

An incorrect offside flag denied Sand an equaliser after the break but just as it looked like Lanús were heading for what would have been only second defeat in eleven, the iconic centre forward salvaged a point. Pouncing on a loose ball in the box, Sand fired Lanús level and with it denied San Martín a huge three points.