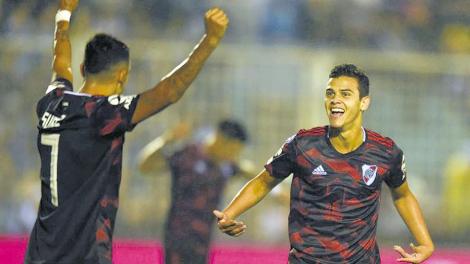 Only a few months ago River Plate were fending off interest in Exequiel Palacios and now another teenage midfielder is reportedly set for a bumper new deal complete with hefty release clause. 19-year-old Cristian Ferreira is in discussions with the club after scoring another vital goal as Los Millonarios secured a 1-0 win over Atlético Tucumán to leapfrog their hosts into the fourth and final Copa Libertadores spot.

The youngster’s injury time free-kick snatched River a point in their midweek Copa Libertadores opener and on Sunday evening, Ferreira’s smart volley was just enough for all three points.

River should already have had a penalty when Ignacio Scocco almost had his shirt pulled off his back when through on goal but Ferreira made certain that referee Diego Abal’s error didn’t prove costly with his goal after 19 minutes.

Atlético, fighting for a spot back in the Copa Libertadores, upped the pressure during the second half and came close on a number of occasions but couldn’t find a way past Franco Armani. With the win, River jumped into fourth on goal difference and must now hold off the competition for the final four Superliga fixtures.

Earlier in La Plata, Estudiantes came out on top in the Clásico Platense though Gimnasia were far from happy with the officiating of Germán Delfino.

A typically fiery derby saw Lorenzo Faravelli sent off for a strong first half challenge and with Gimnasia manager Hernán Ortíz also removed due to his protests, it set the tone for an ill-tempered game.

Lucas Albertengo headed Estudiantes in front just before the break and it proved decisive. The home side came close to a second after half time but couldn’t increase their advantage while ten man Gimnasia rarely looked like threatening.

Estudiantes youngster Mateo Retegui was sent off late on and Gimnasia goalkeeper Alexis Martín Arias saw red at full time to conclude a game that only supporters of El Pincha will have taken much enjoyment from.

Estudiantes have since confirmed the return of Gabriel Milito as their new manager and will be hoping that a strong end to the season can leave the club well placed going forward. Another new manager, Ricardo Lombardi is praying that he can keep San Martín de Tucumán in the league and on Sunday Caruso secured three points to provide a glimmer of hope.

A Nicolás Giménez penalty soon after half time and a breakaway Luciano Pons third gave San Martín their win and while Caruso’s side remain in the drop zone with three games remaining they are still alive.

Meanwhile in Avellaneda, Independiente responded to their poor form with a deserved 2-0 win over Aldosivi.

Jonathan Menéndez, back in the starting eleven after his move to Toronto FC collapsed at the last moment only weeks ago, slotted in the opening goal just before half time and although El Rojo wasted several chances to make things more comfortable, the points were secured late on as Pablo Hernández tapped in Cecilio Domínguez’s low cross.