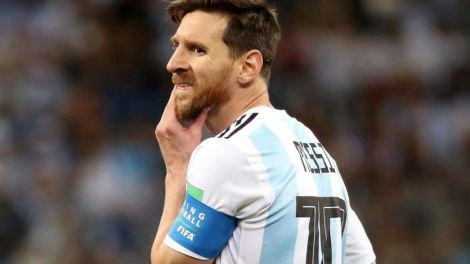 Lionel Messi’s career in Barcelona has been an almost unbroken 15 years of plaudits and trophies; an international career with Argentina, resulting in three major final defeats, has been in stark contrast. The ruthless Argentina press have certainly not given the world’s best player an easy ride and in a rare interview with radio station Club Octubre 94.7 FM, Messi revealed just how difficult some of this criticism has been.

“It’s hard, my son is always looking on YouTube and saw a video. He asked me why in Argentina they want to kill me.

“But I like to keep going. I still want to win something with the national team. I am going to play all the important games. We already reached a World Cup final [in 2014] and this is not that easy”.

Since that defeat to Germany in Brazil, Messi has seen two Copa América titles slip through his fingers after penalty shootout defeats to Chile and following last summer’s debacle in Russia, the national team once more came under fire.

“After Argentina’s defeats, it somehow became customary to say things about me. They [the media] often invent lies about me, and nowadays I am not surprised.

“I’m used to what they say about me, they are always making things up and it makes me angry because people believe what they say.”

Messi played in Argentina’s 3-1 defeat to Venezuela last week in Madrid before a minor groin strain forced the captain to miss the draw with Morocco. An absence from duty which again led to criticism from some quarters.

“The truth is, I went into the international break with a strain I’ve had since before the December break. The groin injury is complicated. I feel better, but I have to look after myself.”

No stranger to defending himself from press accusations, a harmless injury precaution is a minor charge in comparison with the years of media-fuelled nonsense that Messi runs the national team.

“I don’t want to make a reality all the lies they say about me. I don’t decide on the national team coaches. I hear all these bad things and it is hard to enjoy things in those circumstances.

“It’s crazy that people say my father manages the national team. They also claim that he has the power in the AFA [Argentine Football Association]. My family suffers as a result of this. I have friends and family that suffer as a result of the lies told. Anybody can say anything, people buy into this and then I’m the bad guy.”

“The Messi friends club is something that I’ve heard for years. I was supposedly the one that chose the lineups, brought in the coaches and virtually ran the AFA. Those ‘friends’ happened to be the best players at their clubs so it made me upset to hear it.”

Certainly the 2014 World Cup was a turning point for Messi and the what-might-have-been generation. Victory over Germany would have immortalised the group but instead defeat appeared to weigh heavily on each of them and the agonising Copa América losses only worsened the situation.

Desperate to make amends, the same group toiled in their attempt to lift a major trophy and defeat to France in the World Cup last 16 four years on from that defeat in Brazil was the end of the road for many.

“If we had won the World Cup in Brazil all would be different today. We lost because of fine details. After that it was a mess and I think the press should have dealt with it differently.”

Sadly the relation with the Argentina media progressively got worse during that four-year period and no doubt played a major role in Messi’s short-lived retirement following the Copa América and again with his extended break post-Russia.

“I thought about locking myself up [after the 2018 World Cup exit], mourning only with my family and forgetting everything I had lived through. I tried to isolate myself from everything a little, to get away from the National team.

“Many people told me not to return, family and friends. They tell me, ‘Why the hell do you want to go back to that? To suffer?’

The recent international break saw Messi return and his participation in the forthcoming Copa América has already been confirmed.

“I want to keep trying. I want to win something with Argentina.”

“It hurts and bothers me when people question our commitment. We’ve been fully committed to Argentina and our actions prove it. I don’t have to say it all the time. Our group shows it (how much we love the national team) differently. Those that want to believe otherwise, that’s fine. We just didn’t go out and talk about it. We don’t have to tell people what we did. We did it. We’re footballers. We’re professionals and we love Argentina. If we didn’t we’d never go back.”

Argentina’s new look squad will travel to Brazil once more in a few months providing Messi with another opportunity to break his duck with the national team and the Barcelona star spoke about coach Lionel Scaloni’s idea.

“He wants a strong and a solid team which doesn’t concede chances, doesn’t suffer in defence and that is safe without the ball,” explained Messi.

“He wants me to start on the outside before earning superiority on the inside. He especially wants us to build a hard team.

“The national team is in a transition period but obviously there remains a huge amount of respect for the team all around the world. For what it means, what it earned.

“We must be realistic. If you want to be a challenger you must earn it on the pitch and there’s a lot of work to do before we become a challenger. A lot of players have only seven or eight games with the team so we must be patient. We can become a force because there’s enough potential.”

Patience is one thing that the press and supporters do not have in Argentina and while Messi knows this better than anyone, the 31-year-old once more hinted at a possible swansong in Rosario before retirement.

“I would love that but it won’t be easy, for all that it means going back to Argentina. I must think about the kids and Thiago is starting to become a big boy, so he takes decisions together with us.

“Of course I would like to play for Newell’s but I really don’t know what is going to happen.”