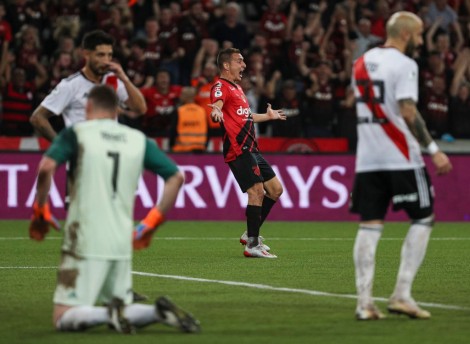 Marcelo Gallardo is gunning for a tenth title as River Plate manager, a haul that would take him one clear of Ramón Díaz as Los Millonarios most successful manager of all-time, but on Wednesday evening in Curitiba his side produced one of their weakest performances to slip to defeat against Athletico Paranaense.

The tone for a frantic first half played at break-neck speed was set within a minute when former River midfielder Lucho González burst forward and stung the palms of Franco Armani from distance. Gallardo’s River, so often the side whose intense pressing strangles the life out of opposition, were on the receiving end of similar treatment and unable to string passes together it was Athletico in the ascendency.

Nikão had spurned one glorious one-on-one chance when midway through the first half the home side broke the deadlock and it was no surprise that it full-back Renan Lodí was heavily involved. The 21-year-old has been one of the standout players in this year’s Copa Libertadores and overlapping down the left had already tormented Camilo Mayada when his 25th minute foray into the box found Rony, who was able to drill the ball across the six-yard box for the predatory Marco Ruben to finish.

Renan Lodi would almost create a second immediately when his whipped cross from the left skimmed off the head of Lucho González before evading Ruben at the back post.

A much scrappier second half saw the tempo drop but barring a deflected Exequiel Palacios shot and Nicolás De La Cruz not quite being able to reach a cross, River struggled to create openings.

Instead it was Athletico still posing the greater threat with Renan Lodi volleying at Franco Armani and the Argentina goalkeeper needing to stay alert to tip a free-kick over the crossbar.

With ten minutes remaining, Milton Casco, who was celebrating his place in the Copa América squad, saw red after an incident in the penalty area. Amid the usual bustle before a set-piece, Rony fell to the turf clutching his face and after a VAR review, referee Wilmar Roldan spotted the slightest of slaps from Casco.

Athletico couldn’t add to their lead even with the numerical advantage and will take a slender lead to the Monumental next week. River Plate will almost certainly be better and they will need to be if they are to overturn the result and claim number ten for Gallardo.