Imagine being 18-years-old and receiving a phone call that you have been waiting for and hoping someday would come. A call that could change your future. A call that could allow you to live out your hopes and dreams. For young Juan “Colo” Barinaga, he received that call in June 2019. His representative delivered him the news that he would be offered his first professional contract. And on June 22, Juan signed a three-year contract with Belgrano.

His route to becoming a professional footballer has not been without failure and heartache. As with many, he has had to deal with several bumps and curves along the way – and will continue to have them in the months and years to come.

I spoke with Juan over the phone to learn more about his journey.

Juan was born in Rosario and began his footballing career with Newell’s Old Boys. When he was 13, he was informed that his time with Newell’s would not be extended. He then joined ADIUR, a small club in Rosario where he had the chance to continue to learn and grow. He was also selected to play for a Rosario XI, made up of the best players from the city, that traveled to Miami, Florida to play against some of the best youth clubs in the world. His team played Real Madrid, yes, the Real Madrid in the semi-finals and he scored a goal – “Still to this day that was the best experience of my life.”

In 2016, Colo came to Córdoba to try his luck with Belgrano. After the tryout, he was told that he would have the chance to stay on with the club, but he didn’t hear anything back for months and assumed that the opportunity had passed. As the year came to a close he finally heard back from Belgrano, who asked him to move to Córdoba and join the club. This would require him to leave him family behind in Rosario, but it was an opportunity that he couldn’t refuse.

In the beginning of 2017, he made the almost four hour move west and joined the academy. For Colo, it was the best thing that could have happened to him, not only for his football career but for his life. He had to figure out how to live on his own. He didn’t have any friends and had to take care of himself.

“I had two years left of school and was able to complete it last year. I’ve been to several other academies, and Belgrano is by far the nicest. All the people at the club are very kind and humble. We always had activities to do with the club. Overall, the people in Córdoba are just a little more friendly than those in Rosario. I matured a lot when I came to Córdoba, as a footballer and as a person.”

In 2018, Juan was playing in the under-18s for Belgrano when they won the championship against Estudiantes on penalties after playing much of the match a man down. The team went undefeated in the second half of the tournament and won the title playing “a lo Belgrano” (The Belgrano way).

Juan was then given the chance to join the first team for the January 2019 preseason. With Diego Osella at the head, the club was still hopeful to remain in the Superliga. But all that changed in April when Belgrano was relegated. As a member of the club, Juan was in the locker room after the match.

“We looked at each other and had no idea what to say. It absolutely killed me. I couldn’t believe that a club like Belgrano would have to play in the B. I didn’t feel culpable, but I was a member of the team and I did nothing to help. Along with my teammate, Gero Tomassetti, we both began to cry. It hit a part of me that I didn’t know I had. I wasn’t a Belgrano fan, but once we were relegated, I felt like a fan because it hit me in a way I didn’t know was possible. I was very hurt for a couple of weeks.”

But from one of the worst moments of his life, one of the best came just months later when Juan Barinaga was able to sign his first professional contract with Belgrano – the club that he confirms, he is now, “without any doubt”, truly a fan of. 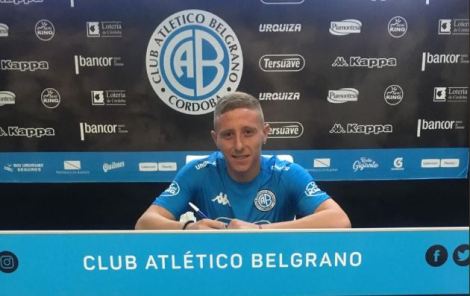 “It was amazing for me and my family to finally sign that first contract. To finally be able to give back and help my parents. To become more independent as a person. But with the contract comes many more responsibilities. I am no longer just another young player and I have new obligations with the club.”

Throughout the relegation battle, Belgrano’s fans were screaming for Osella to play some of the up and coming players because it was clear that the team was not performing at the required level to remain in the Superliga. While Juan had taken over the starting spot at right back for the reserve team, his name was not one of the names being called for by the fans. Not because he was not deserving of a first team debut, but because the player occupying that spot was possibly the most beloved member of the club, Tomí Guidara. But with Guidara’s departure to Vélez, a spot has been opened and Colo’s debut seems closer than ever.

“There is a hole there and I have to take advantage of it and continue to prepare for when that opportunity comes.”

With any relegation, the financial limitations make it essential for the club to rely on young players to carry much of the load if they hope to return to the first division. But just as with Lucio “El Gringo” Alonso, Matias Gigli, Guillermo Farre, Franco Vazquez, and others, eternal club legends are made during promotion seasons. For Juan and others, their promotion and return to the Superliga would immortalize them forever in the club’s lure. It’s a goal for Juan, and everyone on the team. From the moment Belgrano knew they were relegated, the cry from the fans and players alike has been the same “Vamos a Volver” (we will return).

Let’s get to know Colo a little bit better:

Do you prefer to drink mate sweet or bitter?

No. There are a few songs that are good, but overall, it’s not for me.

Favorite Argentine footballer, other than Messi?

In your free time, what do you like to do?

Listen to music. Drink mate. I would also love to start to study something, but I haven’t found anything yet that I want to study.

If you weren’t a footballer, what would you be doing?

Other than Belgrano, what football club do you support?

Newell’s Old Boys. I’ve always been a fan and went to the stadium since I was young. Both my grandfather and dad are Newell’s supporters.