In the beginning God created the heaven and the earth.

And on the second day, God created football and saw that it was good and was pleased.

God knowing that His world would need a savior, decided to take upon himself the form of man and inhabit the earth.

In the year one thousand, nine-hundred and sixty, on the thirtieth day of the tenth month, God was born of a woman and took upon himself the form of man and was given the name Diego Armando Maradona.

God grew in stature and favor with man. He knew of his mandate to save a fallen world and that He must triumph over all his foes.

As he reached the age of twenty and five, wearing a shirt with the colors of heaven, God defeated the world. He held in his hands a golden earth. And God was pleased. 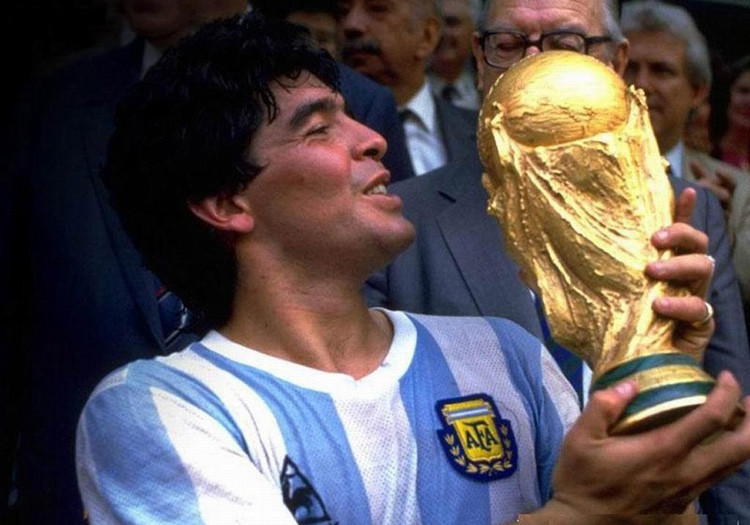 In the hearts of many Argentines Diego Maradona is nothing short of a God. Over thirty years since he raised the World Cup trophy, he is still the symbol of success for the Argentina national team. Maradona was a boy from the slums of Buenos Aires who carried a nation on his back and dominated the earth.

The word God is Spanish is Dios. I promise that if you travel today to Argentina, within your first 30 minutes you will see, either on a building, on a shirt, or tattooed on someone’s body, “D10S” – God written with Maradona’s number in it.

From the start of his football career with Argentinos Juniors until the current day where he is now the Manager of Gimnasia de La Plata, Diego Maradona has been the primary focus of football in a country that loves nothing more than football. It is no wonder that he is considered to be a God. If football is a religion and the stadiums are the chapels, the players are those who are worshiped and adored. In the history of football in Argentina, none, not even Lionel Messi, has been more beloved than Maradona (there actually is a religion in Argentina dedicated to him).

Diego Maradona – a new documentary directed by Asif Kapadia focuses on the central part of Diego’s career, his time with Napoli from 1984 to 1991. Among those seasons are two World Cup finals, two Italian titles, a European championship, drugs, women, an illegitimate child, connections to the mafia, fame, and tragedy.

The rise and fall of a person is not a story unique to Maradona, but the altitude reached on the rise and devastation of the fall is what makes Diego’s story stand out.

And while all this was happening, long before the invent of reality TV, Maradona had cameramen filming him. Documentarian Asif Kapadia was approached a few years back and was told of over 500 hours of footage, most of which had never been seen. He was asked if he would be interested in turning it into a film. After initial hesitance, he decided to tackle the project.

Kapadia is best known for the documentaries “Senna” about of the Brazilian Formula 1 driver Ayrton Senna, and “Amy”, the story of the singer Amy Winehouse, for which Kapadia won the Academy Award for best documentary.

Kapadia’s film about Maradona premiered at the Cannes Film Festival earlier this year. It was released in the UK in June and is starting to make its way over to the Americas. It premiered on October 1 on HBO in the United States and will be available in Argentina starting on October 2.

The film uses no narrator. Much of the story is told by the video footage itself. Influential people from Maradona’s life including his wife, trainer, and other friends were interviewed for the film. Asif Kapadia even got Maradona to sit for a nine-hour interview. The faces of the interviewees are never seen but accompany the film to tell the story. Without question, the star of the movie is the never before seen footage that gives the audience a window into the life of Maradona.

Most everyone knows that Maradona was a polarizing figure – an incredible footballer but also a drug addict and a playboy. But instead of just telling you the things you likely already know; the movie shows it to you. For anyone under the age of 30, Maradona is likely to be just a name. Maybe you’ve watched videos on YouTube or heard stories of his greatness, but for many, he is not of their generation. This film’s greatest success is creating a bridge between those who lived through the Maradona saga and those who know little to nothing about him.

The film is a work of art and beautifully paints the picture of the life of two people – Diego and Maradona. As said by Daniel Arcucci in the film, “Maradona in Naples is the story of his life. Rebel. Cheat. Hero. God.”

Whenever we as a society decide to turn someone into a God, because they are not a God, the inevitable next step is for them to become a fallen God. Maradona is just a person. He is like any of us. He is an imperfect man who achieved greatness. He is not God, but he is also not Satan. Love him or hate him, he is the one and only Diego Armando Maradona.

One response to “Diego Maradona: A Window into the Life of Argentina’s Footballing God”