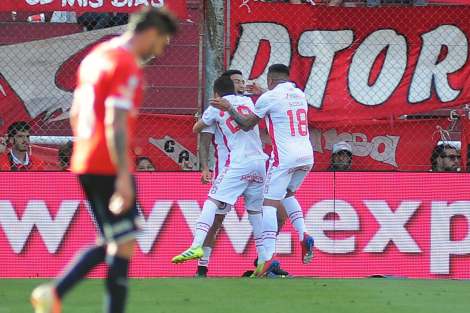 Argentinos Juniors are dreaming of a title challenge after securing a late win over Independiente that fired them level with Boca Juniors at the top of the table while Sebastián Beccacece’s future at El Rojo hangs in the balance.

A game of fine margins was decided four minutes from time when overlapping full-back Elías Gómez drilled the ball inside Martín Campaña’s near post with a packed penalty area expecting a cut-back.

Independiente will rightly feel a sense of injustice over the incorrect first half sending off of midfielder Andrés Roa by the card-happy Nicolás Lamolina but despite playing with ten men for the majority of the game, El Rojo once again lacked ideas.

And that will be of far greater concern to manager Sebastián Beccacece, who is rapidly losing support within the club and faces a critical Copa Argentina quarter-final clash with Lanús next – defeat on Friday could spell the end for the 38-year-old.

Opposite number on Saturday, Diego Dabove, has no such worries at present and was instead trying to temper excitement as Argentinos Juniors climbed to the top of the Superliga, level on points with title favourites Boca.

“You have to take a moment to enjoy it but maintain a balance,” Dabove said in Avellaneda, “I didn’t expect it but I always had hope.”

Given only a short while ago Argentinos Juniors were promoted back to the top flight and still concerned about the prospect of a swift relegation, Dabove has certainly restored some hope and now the Bichos are dreaming.

Newell’s Old Boys are also making light work of their supposed survival battle with a win over relegation rivals Patronato in Paraná to climb within three points of the leaders.

Rodrigo Salinas profited from a mix-up at the back to loop the ball over Patronato goalkeeper Matías Ibáñez after 19 minutes and it wasn’t the only good fortune that Newell’s benefitted from.

A fired-up Patronato emerged after half time and asserted themselves on the game for a lengthy spell. Santiago Rosales clipping the post when through on goal and a strong handball appeal against Lucas Albertengo in the penalty box waved away by referee Fernando Rapallini.

With Newell’s having weathered the storm, Albertengo would prove decisive ten minutes from time, the forward’s wonderful header floating inside the far post and all but sealing the points.

A harsh scoreline on Patronato and while Cristian Tarragona did pull one back in stoppage time it was a damaging loss for the side still in the bottom three of the promedio table.

Another of the club’s defying their position in the promedio at the start of the season is Lanús and with victory over Talleres in Córdoba, El Granate climbed to third.

A blistering start saw Marcelino Moreno tripped and José Sand convert a third minute penalty and when 19-year-old Alexander Bernabei skipped around Guido Herrera to double the lead soon after, Talleres were in danger of being blown away.

They perhaps should have been when Sand managed to hit the post rather than the net from yards out but having managed to stem the tide, Talleres gradually grew into the game. Dayro Moreno found some space at a corner just before the break and smashed the ball into the roof of the net to set up what should have been a tense second half.

Lanús had other ideas and if Luis Zubeldía’s side started the first 45 minutes quickly, they were like lightning after half time. Barely ten seconds were on the clock when Moreno burst through the heart of the Talleres defence to restore the two-goal lead.

The frantic opening continued with Nahuel Bustos replying swiftly for Talleres only for Lanús to attack once more and on this occasion Nahuel Tenaglia diverting into his own net.

Aside from a strong penalty shout for the home side denied the game petered out somewhat and Lanús held on for another fine three points.

Amid all these sides picking up enough points to virtually forget about relegation Banfield’s worrying form saw El Taladro drop into the relegation zone only to be saved by a point later in the day by Patronato’s loss.

The return of Julio César Falcioni has not yet had the desired effect at the Estadio Florencio Sola and a last minute Fabián Monzón goal gave Atlético Tucumán victory on the road.

Leandro Díaz had bundled the visitors ahead early and Banfield’s problems in front of goal once again cost them dearly. The equaliser Falcioni’s side did muster came thanks to a Marcelo Ortiz own-goal, the Atlético defender deflecting Agustín Urzi’s cross into the net, but Banfield had chances to win it.

Junior Arias headed a glorious opportunity off target and Inter Miami-bound Julián Carranza blazed over when one-on-one with Alejandro Sánchez.

And so after spurning such chances with four minutes remaining Luciano Lollo was shown a second yellow card for a handball on the edge of the penalty area and from the resulting free-kick Monzón blasted through the wall.

Unless Banfield can start scoring and arrest this slump, relegation is a very real possibility.