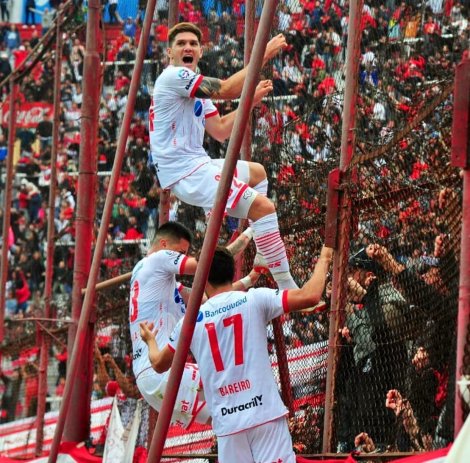 Much of the talk at full time surrounded referee Fernando Espinoza and the claim that Huracán president Alejandro Nadur and several others entered the dressing room at half-time unhappy with decisions during the opening 45 minutes but whatever happened off the pitch, on it El Globo claimed a deserved clásico victory over San Lorenzo.

As the early pacesetters in the Superliga, San Lorenzo were hoping to stop their recent slump and welcomed back captain Fabricio Coloccini from injury for the nearby trip to Parque Patricios. However, the former Argentina international could do little to prevent Lucas Barrios out jumping him to head Huracán in front midway through the first half.

The home side’s anger stemmed from a penalty not awarded soon after when Bruno Pittón appeared to pull down Juan Garro after getting caught the wrong side of the forward when a cross was swung towards the back-post.

San Lorenzo had their own reasons to feel let down by referee Espinoza as Héctor Fértoli took a forearm in the face from Carlos Araujo but once more the officials saw nothing wrong.

Whether or not Huracán did speak to Espinoza during half time is certainly no excuse for San Lorenzo and their toothless display failed to create any clear opportunities.

Eight minutes from time the home side wrapped up the win as a corner bobbled in the penalty box and substitute Fernando Coniglio stabbed the loose ball past Nicolás Navarro. The centre-forward’s jubilant celebration climbing the fencing brought with it its own controversy given Coniglio had already been booked and should have been shown another.

But despite Espinoza failure it made no difference to the result. Huracán under the guidance of Néstor Apuzzo are unbeaten in four games and are yet to concede in that time while Juan Antonio Pizzi is desperate to turn things round. San Lorenzo’s bright start has declined into four defeats from their last five.

While San Lorenzo’s form has gone one way, Vélez Sarsfield have gone in the opposite direction after their slow start to the season. A 1-0 win over previously unbeaten Rosario Central was a sixth win in seven and fired Gabriel Heinze’s side fourth, only three points behind the leaders.

Vélez weren’t at their best and had to ride their luck at times but a fine Leandro Fernández strike nine minutes from time sealed it.

After seven consecutive draws and a position in the bottom three Central were desperate for three points and will feel that Emanuel Brítez should have been awarded a penalty when the game was still goalless.

There was a strong shout at the other end too for handball and while neither side were given any help from referee Ariel Penel, Central came within a whisker of yet another draw. Claudio Riaño headed against the crossbar late on and Diego Novaretti saw his rebound cleared off the line as Heinze’s impressive side claimed another victory.

Central remain in the relegation zone as do Diego Maradona’s Gimnasia after failing to follow up their previous win with another three points while Aldosivi boosted their hopes with victory over Defensa y Justicia.

Early in Mar del Plata Aldosivi climbed out of the drop zone thanks to Federico Andrada’s first half goal and a good slice of fortune. It wasn’t Defensa y Justicia striker Fernando Márquez’s day, the big centre-forward hitting the woodwork when through on goal and seeing two second half efforts ruled out for offside.

Aldosivi remain in trouble but not nearly as much as Gimnasia after a fourth defeat in five matches for Maradona when Unión visited La Plata.

Lacking creativity and unable to make the most of any half chances that did come their way Gimnasia were punished in the 78th minute as former player Ezequiel Bonifacio arrived unchecked at the back-post to volley the winner.

Eleven points from safety, Maradona’s task to keep El Lobo in the top flight remains as daunting as it was when he took charge.