Adoring cries of “Muñeeeeeeeco” echo around the Monumental.

The swaggering, sharp-suited protagonist, raises an open palm in acknowledgement.

Standing at 1.65m, baby-faced and impeccably dressed; it is easy to see why River Plate head coach Marcelo Gallardo is nicknamed El Muñeco. The doll.

But beneath this loveable label lies a trophy-hungry tactician with a unique ability to unify, in a country where instability is a way of life.

Having dropped anchor in Buenos Aires this February, I’m already late to the Gallardo party.

However, these are surely just the opening credits of a managerial career that will stretch far beyond South American silverware.

The final itself – with the second leg played in Madrid – was an explosive reminder of why the Superclásico remains the ultimate derby in world football.

Following such a hyperbolic triumph, many coaches would have locked-in their legacy and quickly segwayed to Europe.

As El Muñeco conceded to his coaching staff:

But Gallardo opted to stay at River. It was a curious move. The resolution of a man determined to dictate his own narrative.

And in 2019, Gallardo’s decision has been vindicated.

River are once again close to knocking Boca out of the Libertadores. This time at the semi-final stage, following a 2-0 first leg victory.

If doubling down on Buenos Aires dominance was behind Gallardo’s motivation to stay – bar an improbable second leg turnaround – he is about to be rewarded.

The view from an aeroplane landing in Buenos Aires as River Plate and Boca Juniors players entered the stadium last night 😲pic.twitter.com/1ixb48zpiK

Not even the price of a coffee is secure in Buenos Aires.

Unflinchingly, as you do in a new and distant land, I paid. Superior beans, perhaps? No. Inflation.

Argentina’s economic troubles (projected 53% inflation in 2019) filter through everyday life of which football is a focal part.

An ever-changing league structure, wafer thin managerial shelf lives and clubs riddled with debt are other variables that thwart consolidation.

And yet Marcelo Gallardo has brought stability and success to River.

He has accumulated 10 trophies since his arrival in 2014, en route to becoming the most decorated coach in the club’s history.

Gallardo’s accomplishments are not too far behind.

This season River are seeking their third Copa Libertadores in five years and back-to-back Libertadores titles for the first time since Boca achieved the feat in 2001.

A far cry from their infamous relegation to the Argentine second tier, less than a decade ago. 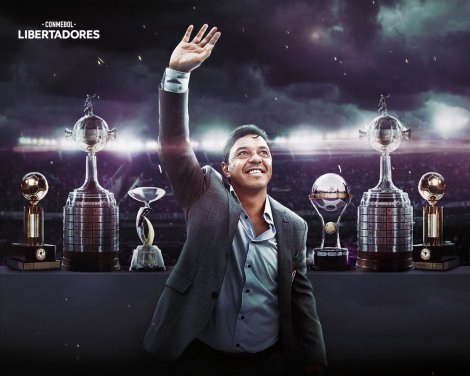 Aside from a chock-a-block trophy cabinet, what makes Marcelo Gallardo so special?

Firstly, the players love him. As do the fans. A great start. In any walk of life, a likeable leader is far easier to follow.

In the cafes, bars and WhatsApp groups of Buenos Aires, River sympathisers are everywhere.

Argentine football fans, unaffiliated with either side of the Superclásico see-saw do not conceal their admiration for the 2018 South American coach of the year.

Secondly, he’s an in-game problem solver. A tactical shapeshifter, with an uncanny ability to nudge single-digit percentages in River’s favour.

Some people think he’s a bit lucky too.

Less than one hundred years ago Argentina was the 12th richest country in the world – ahead of Canada and Australia.

A subsequent century of political and economic woes have followed, leaving Buenos Aires draped in nostalgia.

But, in a city seduced by the past, Gallardo lives relentlessly in the present tense.

His defensive line is Europeanly high, his forward-thinking methods and carrot>stick approach lends itself to a millennial mindset.

The pre-game graphic often reads 4-4-2, but the in-game reality is fantastically fluid.

Then there’s the high press and relentless energy, mirrored by the boss’ edge of the touchline prowl.

With an international playing career that stretched into the early 2000’s, Gallardo is yet another coach to borrow pages from the Marcelo Bielsa playbook.

It is tempting to believe that Argentina’s domestic league – the Superliga – is of little concern to the former Monaco playmaker.

Gallardo – who won the Libertadores as a player with River in 1996 – knows league success or failure matters little to his standing outside the continent and even to his overall legacy.

International trophies are his currency. And these are the accomplishments that elicit European interest.

Pep Guardiola: “I can’t explain how Gallardo isn’t nominated for the best coach in the world.”

“I can’t explain how Gallardo isn’t nominated for the best coach in the world. What he has done is incredible” – Pep Guardiola

During his distinguished playing days Gallardo won a trophy at every club he represented: River Plate, Monaco, PSG, D.C United & Nacional (of Uruguay).

He is clearly a globalist.

A top-tier club in France or Spain would appear the most natural fit, whilst links to the Premier League – for now at least – are more muted.

Chronic instability at the Argentine FA make any current coaching role a no-go.

There is clarity in the assumption that Gallardo will not move to Europe for a mid-tier team. His ego and increasingly his CV would not allow it.

And then there’s the army of Buenos Aires taxi drivers who think he will stay put.

Gallardo has a contract until 2021 and became a father for the fourth time earlier this year.

A string of managerial misdemeanours – including naked disregard of a CONMEBOL ban, in order to deliver a (ultimately decisive) team talk against Grêmio last year – will do little to deter potential suitors.

Staying on after River’s 2018’s Superclásico victory was unusual, remaining at River beyond this year’s Libertadores run would be extraordinary.

River travel from the city’s affluent North, to Boca’s South-East backyard, on October 22nd, for the return leg of their Copa Libertadores semi-final.

La Bombonera will provide a genuinely unparalleled atmosphere, as River’s rivals seek an unlikely comeback from two goals down.

A day later Flamengo host Grêmio at the Maracanã, with their all Brazilian semi-final tie more finely poised at 1-1.

The prospect of a River Plate vs Flamengo showpiece has the potential to transcend the continent.

Big spenders Flamengo, now under the leadership of Portuguese Jorge Jesus, have a squad laced with attacking quality.

A winner-takes-all standalone final – for the first time in Libertadores history – would arguably be El Muñeco’s biggest test yet.

Marcelo Gallardo, at 43, may have maintained the boyish good looks that saw a teenage nickname stick.

But this easy-on-the-eye Argentine has a rare ability to unite.

And a brain that draws clear lines through the tactical kaleidoscope of the modern game.

Champions League clubs shouldn’t just be queuing up for this Buenos Aires born genius, they should be hammering at the door.

David Windsor is one of the lead commentators for the international feed of the Copa Libertadores and Copa Sudamericana.