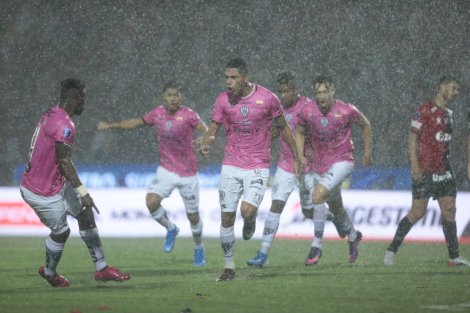 History would be made which ever side won but it was Independiente del Valle who lifted their first ever international title with a 3-1 win over Colón in a rain-soaked Asunción.

Almost 40,000 Colón supporters made the trip to Paraguay for the one-off final and in the baking heat ahead of kick-off were cooled by fire hoses. By the time the match kicked off, that was no longer necessary. The sky darkened, the heavens opened and almost within minutes the pitch at the Nueva Olla was submerged.

After 30 minutes, the storm would force the officials to suspend the match for the best part an hour but Independiente del Valle were already ahead. A free-kick into the Colón penalty box found centre-back Luis Fernando León and his header skidded off the waterlogged pitch through the legs of Leonardo Burián.

Ground staff armed with brooms swept the surface water from the pitch in a desperate attempt to get the final back underway and eventually when referee Raphael Claus was satisfied the ball could roll, the teams reappeared.

It was still raining and although Colón began to get a little foot-hole in the game, it was the Ecuadorians who doubled their lead. The rapid Jhon Sánchez raced away on the counter, cutting in from the left and his attempted centre was deflected into the net by the sliding Emanuel Olivera.

Colón were on the brink and in need of inspiration. That has usually come in the form of Luis Rodríguez yet when the Sabalero were awarded a soft penalty, the flea saw his effort saved by Jorge Pinos.

Heading for defeat, Olivera volleyed a goal back from close range in the 89th minute to set up a grandstand finish.

Pablo Lavallén urged his side forward in desperation but unable to find an equaliser it was Independiente del Valle who instead sealed victory. Alejandro Cabeza was released in behind an absent Colón defence and bypassed goalkeeper Burián with a simple pass allowing Cristian Dájome to roll in the decisive third.

An incredible achievement for an Independiente del Valle side who were only promoted to the Ecuadorian top flight in the past decade. Independiente and Corinthians fell in the earlier rounds and so no one could argue that Miguel Ángel Ramírez’s side weren’t deserved champions.

That doesn’t make defeat any easier to take for Colón, who may be waiting a long time for another chance at glory.