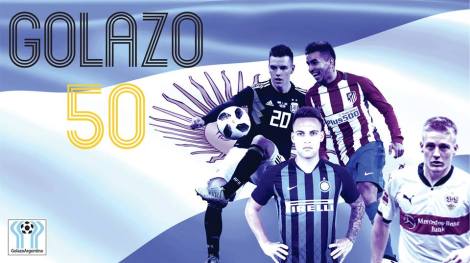 If you missed it already, the countdown of the new Golazo 50 is already well underway so you can catch up here…

If you don’t know what this is, it is the annual look at the 50 best young players in Argentina. All the information about the list is in the first part so let’s get on with part nine as we crack the top ten…

As the son of one of Argentine football’s most recognisable characters, there have likely been as many difficulties as there have been open doors for Giovanni Simeone. Just as father Cholo played with ‘a knife in the mouth’, Gio has at times exhibited that same family trait, the same never-say-die approach that supporters adore, and it has seen the youngster overcome early setbacks to light up Serie A and make a goal scoring debut for La Albiceleste.

A leading figure in River Plate’s academy, Simeone was tipped for greatness at a young age and his prolific scoring ability saw a first professional contract signed in 2011 with a release clause of €15 million to match that potential. A senior debut followed but chances in the first team remained few and far between.

That didn’t prevent Gio from dazzling with the Argentina under-20s and his nine goals in as many games saw the striker take the Golden Boot in a triumphant Sudamericano campaign in 2015.

A successful loan at Banfield, under the guidance of one of his father’s former teammates Matías Almeyda, furthered the youngster’s reputation and his all-round link-up play and promising eye for goal saw Genoa eventually swoop. A stunning maiden season in the Italian top flight produced 12 goals from 29 appearances and it prompted Fiorentina to part with €18 million.

Goals have continued to follow Simeone, even if not prolifically, but supporters in Florence have been won over by the centre forward’s commitment. This earned Gio an international debut against Guatemala last September and after finding the net that evening in Los Angeles, the forward remains on the cusp of Lionel Scaloni’s plans.

It’s tough not to like Ángel Correa – overcoming adversity with a huge grin on his face and playing his football with the type of unadulterated joy that has likely never left him since his childhood on the potreros of Rosario.

That background from one of Rosario’s most deprived neighbourhoods and the tragedy of losing a father and brother by the age of twelve could have put an early end to Correa’s dreams but it didn’t prevent the shy boy from making the move to Buenos Aires with San Lorenzo. Such a talent in the Cuervos’ academy, Benfica hovered before even a first team debut had materialised yet the teenager remained in Bajo Flores.

And it was just as well, Correa was an almost instant hit and soon after San Lorenzo lifted the 2013 Torneo Inicial. A historic maiden Copa Libertadores triumph followed, one which lifted a heavy weight off the shoulders of San Lorenzo, and it was midway through this campaign that Atlético Madrid swooped for one of Argentina’s brightest talents

The world appeared to be at Correa’s feet but a benign heart tumour discovered during his medical led to major surgery and months of agonising wait. Returning to action with the captain’s armband for Argentina at the Sudamericano in 2015, Angelito made up for lost time proving himself as the continent’s best young player as La Albiceleste lifted the trophy.

Diego Simeone used Correa sparingly but Gerardo Martino didn’t need any more persuading and granted an international debut to “Argentina’s standout young player” in 2015. Things in Madrid took a little longer to become established yet Simeone remains a staunch supporter of Correa and while many players have failed to make the grade under Cholo, the hardworking forward has eventually played his way into a key role.

Consistency and end-product may still stop Correa being one of La Liga’s standout players but the 24-year-old is still capable of match winning performances and in a new era for Argentina, Angel could still claim a more permanent role.