Continuing our look at the best young players in Argentina, we now reach number four. In case you missed it here is a recap so far: 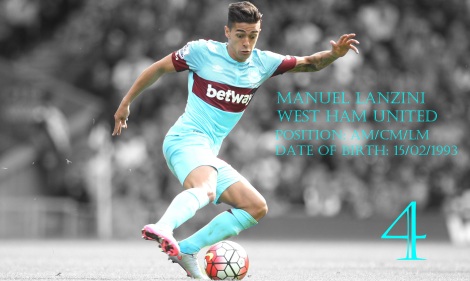 West Ham’s loan signing of young Argentine midfielder Manuel Lanzini from UAE side Al Jazira went somewhat under the radar during a summer of optimism at Upton Park. A slightly built South American who had been playing in a league with a reputation as more of a final payday for footballers rather than a breeding ground for talent was understandably viewed as a signing that would require a little patience.

The truth, however, was that the West Ham faithful needed to wait just three minutes into Lanzini’s debut for a glimpse of his talent. The 22-year-old dropped his shoulder, cut onto his right foot and rifled Bilic’s side in front against Romanian’s Astra Giurgiu in the Europa League qualifiers. A second goal in his first start for the trip to Anfield confirmed Lanzini’s presence in Bilic’s midfield but his impact surprised even the Croatian coach, who had been tracking the youngster since his River Plate days.

“I thought he was going to need more time because he played in the UAE.  He is a phenomenal player, who is very comfortable on the ball, no matter where he is,” explained Bilic, who came close to signing him for Besiktas.

Emerging from the youth system of the Argentine giants, which he had joined as a nine-year-old, Lanzini made his first-team debut at 17 and drew immediate comparisons with former No. 10, Pablo Aimar. What both players lacked in physical attributes they made up for in touch and vision.

Bestowed the famous River No. 10 shirt, Lanzini at times struggled for consistency but endeared himself to supporters with two memorable goals at La Bombonera against bitter rivals Boca Juniors – his header in the 2013 Torneo Final being the fastest scored in a superclásico.

Given the reported European interest and Argentine football economics dictating player sales, Lanzini’s exit was inevitable but it came as something of a surprise when that move was to Emirati club, Al Jazira.

The concern was that Lanzini was taking a sideways step in his career but he and the even the club knew that his stay in the UAE capital would be temporary.

Marking his debut with a brace, Lanzini’s overall contribution to the Al Jazira attack during the 2014-15 campaign was impressive. Behind centre-forward Mirko Vucinic, Lanzini scored a modest eight but crucially was involved in 70% of his side’s goals.

Not wanting to miss out on Lanzini again, Bilic ordered West Ham to move and a one-year loan agreement with an option to make the deal permanent for £7 million was arranged.

Bilic has taken Lanzini, the advanced playmaker, and dropped him deeper to play a far more significant role in retaining possession, dictating play and assisting with defensive duties. Where many had seen Pablo Aimar, earlier in his career, Bilic sees more of his compatriot, Luka Modric.

Bilic can certainly take credit for making Lanzini a far more complete midfielder and West Ham look a much better side with the 22-year-old in the starting eleven. There is still plenty of room for development but Lanzini is beginning to deliver on his early promise and a bright future surely beckons.

Rupert Fryer – Brasil Global Tour / The Guardian / ESPN / Eurosport @Rupert_Fryer “It feels like just last month we were watching a 17-year-old Lanzini leaving our jaws a gasp – most likely because he still looks like he’s 17 and has been in jaw-dropping form for West Ham.
It seemed an odd transfer at the time. He had failed to make any real impact in Brazil and was seemingly just cutting cheques in the Middle East, which has become something of halfway house for those too good for Argentina but not quite good enough to be worth the investment from Europe. Moreover, there were major concerns over how a man of his size and frame would handle the rough and tumble of English football.
Thankfully, Slaven Bilic had no such worries. He instantly became a fan favourite and now looks a snip at around €10 million. He took the scenic route, but Lanzini has officially arrived in European football and next season could be a real breakout year for a 23-year-old who is finally fulfilling the promise he showed as a 17-year-old.”

Tom Victor – JOE.co.uk and West Ham supporter @tomvictor “Great on the ball and deceptively strong both physically and defensively for someone of his build. Think halfway between Payet and Parker.”

West Ham coach Slaven Bilic via Evening Standard “I have never seen a player who reminds me of Luka Modric as much as Manuel Lanzini. Luka is my favourite player. He is my prototype of a great midfielder. He [Lanzini] could play in a number of positions but his best is wherever the ball is. So he has to be central where he can have most contact. He always makes himself available. If the players are in trouble, he comes and gets it. He does not look strong but some players can defy that physicality to impose themselves.”